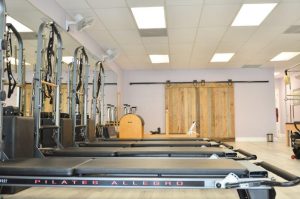 PYC: Pilates & Yoga Center, PYC for short, educates and trains enthusiasts of both Classical Pilates and Yoga. Conveniently located on Congress Avenue in Boynton Beach, FL, the studio is home to the area’s most qualified, experienced instructors and state-of-the-art equipment.

PYC’s was created to make Pilates & Yoga more accessible to the area. PYC is the very FIRST location in Boynton Beach to offer Classical Pilates & Yoga instruction under one roof.

Formally operating as Pilates of Palm Beach (est 2009), the studio began as a mobile Pilates studio offering in-home private sessions and group classes. As the demand grew for quality, Classical Pilates instruction, the studio’s first brick & mortar studio opened in January 2010. Since then, they have grown to be the area’s most trusted and respected Classical Pilates studio.

The introduction of Yoga manifested naturally for the Pilates studio. Despite both disciplines being unique in application and practice, PYC looked to positively focus on the benefits of both. In December 2016, the studio underwent a major renovation to add a separate Yoga studio, Yoga of Boynton Beach, to its facility.

As a result, Pilates of Palm Beach and Yoga of Boynton Beach merged to create PYC: Pilates & Yoga Center. In July of 2018, PYC changed ownership.  The studio has since added Personal Training as well as Contemporary Pilates to PYC’s menu of services to allow the wonderful benefits of movement and physical fitness to be felt by all shapes, ages and fitness levels.

360 Virtual Tour
(Click and drag screen to turn around)

All clients are solely responsible for reading and following our guidelines so everyone can have an enjoyable practice, while we maintain and sustain our studio. By attending class you are agreeing to all our guidelines and policies.

It takes a lot to run a studio and provide quality offerings to our clients. We try and offer you the best services possible. In order to do that, please be sure that you’re booking the correct service and can attend classes, privates, and be able to use the membership or services in the specified time allotted. We do not offer refunds of classes, private lessons, memberships or workshops purchased. It is your responsibility to read our guidelines before purchasing. Non use of services are not grounds for a refund. In some instances, per our discretion we can apply a credit to your account.

A full class/session fee will be charged for cancellations with less than a 24-hour advanced notice. Please note, this is aimed to be a preventative measure rather than a penalty. Demand for our classes are very high, no-shows and no-cancels limit other members from participating in classes and booking session at prime time slots.

Of coarse we know emergencies come up, maybe you get caught at the office or home with a sick little one, however in the event that this does happen and you can not cancel 24 hours in advance, please call us at 561-244-5566 so we can let the instructor know you will not be attending class or your session. You will be allowed 2 late cancellation waivers per year.

You’ll love our studio! Come take a tour of the place and learn about the unique equipment and amenities.

Schedule your 1st session with us today! We’ve offer an array of classes at the most convenient hours.